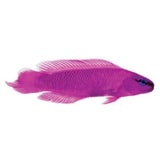 Orchid Dottybacks are found only in the Red Sea. They’re observed in colonies near vertical walls or ledges, where they dart out to grab a meal from the passing zooplankton, then rush back. In the wild they are found at moderate to deep depths, and look blue rather than the magenta or violet color most aquarists are used to. This is due to the filtering of red light by seawater.

In aquariums, Orchid Dottybacks are quite easy to keep and feed. They are small plankton feeders so foods such as brine shrimp, krill and mysid shrimp are perfect. Orchid Dottybacks are moderately territorial and more than one can be kept per tank, as long as the tank has plenty of hiding spaces. Usually, adding multiple small individuals at once will likely result in a spawning harem.

The Orchid Dottyback, like other members of the family Pseudochromidae, lay eggs in a mass that are not adhered to a substrate but held together by filamentous threads. The egg mass is usually deposited in small nooks and caves and tended by the male. The eggs hatch in about 3-4 days and are larvae for 28-30 days.